With perception of BREXIT evolving week by week, what are the likely implications for the UK's Logistics Industry?Dave Berridge outlines the risks and opportunities. 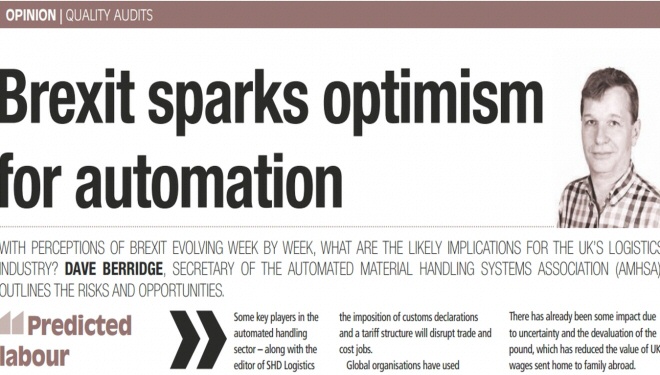 With perception of BREXIT evolving week by week, what are the likely implications for the UK's Logistics Industry?Dave Berridge, Secretary of the Automated Materials Handling Systems Association (AMHSA) outlines the risks and opportunities.

Some key players in the automated handling sector - along with the editor of SHD Logistics - gathered recently for AMHSA's BrexitRound Table, an opportunity to discuss the current and future impact of the referendum result on the logistics sector

The government's White Paper in February tried to add meat to the "Brexit means Brexit" bones, but many feel there is a need for more clarity to create confidence. At the Round Table, we examined the implications in terms of the legal framework, the value of the pound, trade barriers, the availability of labour and investment in automation.

LEGAL FRAMEWORK
The Great Repeal Bill, announced in October, will pre-empt the two-year process of leaving. As well as repealing the European Communities Act 1972, the Bill will preserve EU law as it stands before we leave. Brexit will, of course, bring to an end the jurisdiction of the Court of Justice of the European Union within the UK, and Parliament and the devolved legislatures will be able to decide which elements of EU law to keep, amend or repeal once the UK exits.

An immediate effect of the referendum result was a slide in the value of the pound. It has fallen by some 12% since June and some sources suggest parity with the Euro during 2017, although a degree of stability is currently being experienced. This has provided a boost for UK exporters, while firms using imported raw materials have experienced increased costs.

Although some companies have hedged against currency fluctuations in the short term, they will eventually feel the effect of cost rises and devaluation is prompting some manufacturers to consider moving production abroad. It is worth noting that some other currencies have experienced some depreciation including the Euro and the US Dollar.

The effect of Brexit on the 'four freedoms' that are enshrined in the EU treaties - the free movement of goods, services, capital and people - will be the focus of the negotiations. It is feared that the imposition of customs declarations and a tariff structure will disrupt trade and cost jobs.

Global organisations have used the UK as a gateway to Europe but increased complexity poses the risk of making Britain less attractive for capital investment. However, the current trade arrangements in Europe are by no means simple - the overlapping ovals of the EU, Euro Area, Customs Union, EEA and EFTA in the diagram entitled 'EU and related membership groupings' in the recent White Paper would make even John Venn himself blink!

Office of National Statistics (ONS) figures for 2015 show that the UK imports more from the EU than it exports to the EU and this is a downward trend - the share of UK exports to the EU fell from 54% in 2000 to 44% in 2015. In contrast, the UK imports less from non-EU countries than it exports to them. The USA is our single biggest export market and our fastest-growing export markets between 2005 and 2014 included South Korea (13% per annum), China (17%), Brazil (12%) and Mexico (9%).

Another point to note is that the impact of Brexit on standards - the voluntary technical agreements designed to ease commerce - should be negligible. Standards have increasingly been developed at global level and then adopted at regional and national level. The European standards organisations are not EU bodies and the British Standards Institution (BSI) will retain its membership of them after Brexit, meaning continuity in European and global markets for UK logistics companies.

LABOUR AVAILABILITY
According to ONS figures for 2015, some 2.8 million EU nationals (excluding Irish citizens) are resident in the UK, with over 900,000 of these being Polish. If, as seems likely, the free movement of labour is dispensed with in favour of immigration controls, the fl ow of migrant labour into the UK may dry up. With the logistics industry relying on these foreign workers, there will be labour shortages and therefore upward pressure on wages. There has already been some impact due to uncertainty and the devaluation of the pound, which has reduced the value of UK wages sent home to family abroad.

INVESTMENT IN AUTOMATION
Predicted labour shortages are strengthening the case for logistics automation as fi rms seek to make their operations less labour-intensive. High demand and opportunities for further market growth have sparked optimism among automated logistics suppliers. This demand is being fuelled by the availability of funding and advances in technology that are increasing the scope of automation.

With smaller companies now considering automation, the industry needs to think about adapting its market approach to suit these less sophisticated purchasers. For example, could transactional charging models - with a cost per case picked or load shipped - be more attractive?

Professor Alan Braithwaite also gave a presentation at the Round Table. He showed that post-referendum movements in the value of the pound, the performance of the FTSE 100 and economic growth forecasts had not proven to be the cliffedge falls that had been predicted. He outlined some of the recommendations made by the Chartered Institute of Logistics and Transport at the request of the government. These included: creation of a realistic plan to move the UK up in the World Bank Logistics Rankings from position 10 to the top spot; signifi cant investment in apprenticeships; simplifying and speeding up procedures for EU nationals to obtain dual nationality; nvesting in frictionless digital border management; and incentivising investment in automation.

Back in 1963, Harold Wilson famously warned that, in order to prosper, a "new Britain" would need to be forged in the "white heat" of the scientifi c revolution. It could be argued that the technological revolution is providing a similar opportunity today, and Brexit may be just the catalyst required to ensure it is fully exploited, with UK companies leading the way. „
www.amhsa.co.uk